Azerbaijan: A Timeless Presence is a breathtaking musical odyssey through a rich
artistic and cultural heritage. The music was composed, arranged, and directed by Sami Yusuf
for the Opening Ceremony of the 43rd Session of the UNESCO World Heritage Committee
in Baku on June 30, 2019. The performance was directed by the renowned creative director Andrei Boltenko.

This newly created cultural treasure comprises nine themes; each theme
expresses an aspect of the ethos of Azerbaijan from the land’s earliest
inhabitants some twenty thousand years ago to its contemporary realities and aspirations.

With fifty-seven highly skilled musicians under his direction,
Sami Yusuf displays his mastery of a complex musical language while
staying true to the traditional sounds of the region. The instruments
used (except the piano) are traditional instruments from the region including the tar,
an instrument so significant that it is said to have taken a role in shaping
the cultural identity of Azerbaijanis; the kamancha, the stringed instrument related to the Byzantine
lyra and European violin family; and the balaban, a double-reed ancient wind instrument with a plaintive, solemn sound.

Azerbaijan: A Timeless Presence mesmerises with its dazzling musical range
from the subtle to the powerful and from the evocative to the majestic.
It is the soundscape of a region that displays an underlying universality.
These inspired compositions by this renowned musician evoke powerful emotional responses in listeners
no matter their cultural origin.

• Commissioned by the Ministry of Culture of the Republic of Azerbaijan 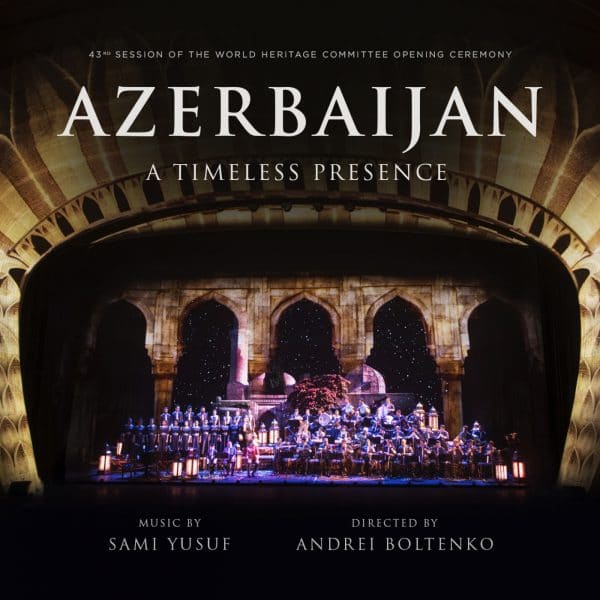